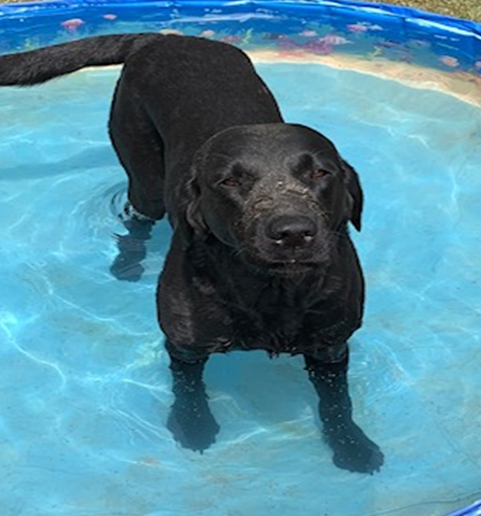 Butter wouldn’t melt – but she has a suspiciously dirty face!

Doesn’t matter how depressed you are, a dog will always cheer you up – I have five black Labs – they are good natured, enthusiastic, loving and incredibly greedy and my youngest Incy is not just a glass half full dog, but a glass over-flowing dog!   At a trip to the Vet she’s ‘Oh goody, goody, the vet, I love the vet, there are other animals and smells and shelves of dog food and I get a biscuit – hooray, hooray.’   She is no master criminal,  when I get home she will come towards me wiggling and wriggling with a silly expression in her face that says ‘You’ll notice that the cheese is missing, it was me, but I couldn’t help it, I was hungry and I’m very, very, sorry!’    The older and wiser dogs remain lying on their beds – it may be that they have stolen the cheese and are the masterminds behind it all, but Incy is determined to bring the missing cheese to my attention.  However, sometimes there is no doubt who is to bame as in the incidents of the cornflour and the Frosties!

The Silly Season!   I know that’s supposed to be August, but this weather has definitely fried a few of my remaining brain cells so here goes with some even more random thoughts than normal!

Radio 4 becomes increasingly niche with its broadcasts – one could argue that 28sh Days Later – the story of menstruation applies to half the population but even though I am a woman, that ship sailed long ago and the few moments that I inadvertently heard the other day made me feel quite queasy.  It happens and we deal with it – I’m not interested in the details and if I was I could find out without having to hear all about it in the middle of the day on the radio.   My generation were just told to get on with it.  That’s considered a terrible thing today when we’re supposed to discuss the hell out of everything.

It is an ever more confusing world – girls think they should be allowed to go out in barely there clothes – skirts split to the crotch and plunging tops without fear of assault.   In an ideal world where all men were gentlemen, didn’t drink and had had most of their testosterone removed this might be the case, but in the real world just because you ought to be able to do something doesn’t mean you should.   Trains should run on time and they usually do – particularly in Switzerland, but sometimes we have to change plans when they are cancelled or late.   Of course, we ought to try and change things for the better but in the meantime, we have to deal with how things are and not how we’d like them to be.

As for MPs – perfectly OK by me if one wants to transition or change gender – that would be their choice and shouldn’t affect any ability to represent their constituents – in fact might be a help if someone can see both sides of the coin so to speak.   But not sure that fleeing the scene of a car accident shows the right qualities for a public servant but worse by far is that he was wearing high heels, pearls and a black leather mini skirt (I also saw it described as PVC – not sure which is worse) – presumably he was fleeing from the fashion police!

How did human beings survive without the constant bossy warnings we get bombarded with day by day – in this heatwave surely we can work out whether to put on sunscreen or to have a drink of water without being told to do so by some government appointed nanny.   Does every pond have to have a notice beside it saying ‘Deep Water’?

I thought this notice was particularly useful!  Just in case it wasn’t completely clear.

Because I always seem to manage to lower the tone of every conversation,  I had to include this story from the Mail online (I know, I know,  I shouldn’t read it – but I probably shouldn’t have had that glass of wine or that piece of cheese either)  It is becoming more and more like a cross between the late lamented News of the World with ‘Freddie Starr ate my Hamster’ type headlines and the National Enquirer featuring such uplifting stories as ‘Kourtney Kardashian’s hottest braless looks over the years’.   Anyway, as usual I have digressed – the headline said,  ‘British Man, 40, is found dead and woman seriously injured after erotic game went tragically wrong in luxury £350-a-night Florence hotel’.   Of course, we don’t know the full story yet, but Florence – the most magical city on earth with its wealth of art and museums, beautiful churches and squares – and you end up like that!   As so often I ask myself why?   I think I must have led a very sheltered life.